“Same Script, Different Cast” could be considered a serendipitous song title for R&B singers Deborah Cox and Whitney Houston’s 2000 duet single. Grammy Award-nominated singer and Broadway star Cox is currently playing the lead role in “The Bodyguard: The Musical” – the same role Houston played in the 1992 hit film of the same name.

Based on the film and adapted by Academy Award-winning writer Alexander Dinelaris (“Birdman”), the national touring production of the jukebox musical features Cox as the music superstar Rachel Marron, belting out the same Academy Award-nominated songs that Houston introduced to the world 25 years ago. Fresh off of a three-week run at the Hollywood Pantages Theatre, the musical will stop at the Segerstrom Center for the Arts on Tuesday, May 30 through Sunday, June 11.

Life has come full circle for Cox, who said she has always looked up to the late Houston – long before their collaboration 17 years ago – and is honored to carry on her legacy through the musical.

“I see it as my job and my mission to help keep Whitney’s music alive and bringing it to the stage has been a huge part of that,” said Cox in a recent phone interview during the Los Angeles run.

Especially exciting for Cox was the Pantages Theatre is where the Academy Awards scene takes place in the film, so she said the theater experience has felt especially authentic for her.

“The movie has always been one of my favorites and Whitney has always inspired me, so initially I was curious and drawn to the fact that this story was going to be a musical,” said Cox,

“And now being in the same spot where Whitney stood, I think the cast and crew is feeling something really remarkable,” she said. “We’re really a part of the ‘Bodyguard’ legacy, because it’s not just about the film now, but the musical too.”

The romantic thriller tells the story of pop superstar Rachel who, after being stalked and sent death threats from dangerous fans, seeks the protection services of former Secret Service agent Frank Farmer, played by actor Judson Mills. While he serves as her bodyguard, the unlikely pair fall in love.

The London West End musical’s premiere opened in December 2012 and ran for nearly two years at the Adelphi Theatre. Since then, the production has toured in the U.K., Ireland, Netherlands and China, with future tours planned for Toronto, Australia and Madrid.

Dinelaris made several changes to the original story, including bringing it to present day and changing the focus to Rachel rather than Frank. The role of Rachel’s sister Nicki, played by actress Jasmin Richardson, is also expanded.

The musical features the film’s highly successful soundtrack as the score, including songs “I Will Always Love You,” “I Have Nothing,” “I’m Every Woman” and “I Run to You,” as well as some of Houston’s greatest hits, such as “So Emotional,” “One Moment in Time,” “Saving All My Love For You” and “I Wanna Dance With Somebody.”

For many actors, filling the shoes once worn by a renowned icon could be intimidating, but Cox says she puts a personal touch on her character, which has helped her make the role unique. The 43-year-old made her Broadway debut in the lead role of Elton John and Tim Rice’s musical “Aida,” and most recently starred on Broadway in 2013 as Lucy in “Jekyll & Hyde.”

“I think in the beginning, I was trying to find my rhythm with it all, because the show is really like a marathon,” Cox said. “I have 15 costume changes as the story progresses and you have to prep yourself in the fastest way possible, because it’s all-encompassing. But it’s all very exciting. The story opens with her playing in a stadium for thousands of people, and you also get to see her performing at the Oscars.”

The role is not too far removed from real life for the Canadian-born singer-songwriter, who began her recording career as a background singer for Celine Dion before releasing her self-named platinum selling debut album in 1995. Cox may be most recognized for her 1998 song “Nobody’s Supposed to Be Here,” which held the record for the longest running R&B single for 14 consecutive weeks and received a Billboard Music Award nomination.

Stepping into the role as a famous pop singer felt natural to Cox, and she hopes that familiarity and comfortableness shows on stage.

“The story resonates a lot with me, so that’s part of the perks of being Rachel … it’s easier for me to find the connection to the story, and I hope the audience will see that I’m sincere.” 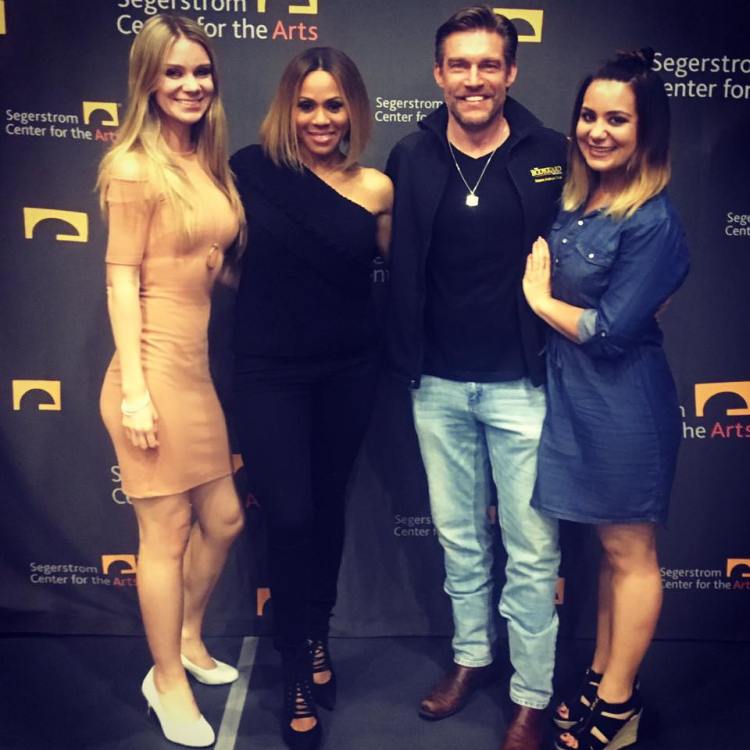 L to R: Jackie Moe, Deborah Cox, Judson Mills and Lisa Moe at the Segerstrom Center for the Arts in Costa Mesa for the opening night of the Broadway musical “The Bodyguard.”